At the beginning of May I wrote an article with some stats on OS and browser share and, perhaps labouring under the misapprehension that some people found it interesting, have decided to revisit those stats after roughly three months have passed.

The figures are taken from the period 27th April to 27th July, and are the mean average of two different sites I manage. For more details on audience and traffic I refer you back to the previous article.

Since the previous post in this series, Google Analytics have introduced a new split in the device categories, with tablet now appearing alongside mobile and desktop. In my range desktop still dominates with 62.7 percent of visits; mobile is in second place with 27.5 percent, and tablets account for 9.9. Of those mobile and tablet devices, iOS is clearly dominant with 59.4 percent of visits to Android’s 24.3.

A new stat this time is the split of browsers used on Android; the stock browser continues to be used on 62.3 percent of devices, with Chrome taking 25.1 percent.

Windows is leader of overall operating systems, used on 40.7 percent of all devices; but iOS now has over half of Windows’ share, 21.5 percent, closely followed by OSX with 20.5. Android is a distant fourth, used by 8.9 percent of visitors.

Safari continues to be the most used browser across all devices, accounting for 33.3 percent of visitors.

Looking into IE more deeply, while IE8 continues to lead there’s been a huge jump in numbers for IE10, up to 27.3 percent from 6 last time, with most of that coming at the expense of IE9. Certainly for the sites in these analytics, IE6 and IE7 have become mostly irrelevant, accounting for just 1.1 percent of total visits. I’ve added an extra chart showing IE version changes at the end of this article.

In the past few weeks I created some extra charts showing a few points of interest. These are taken from the data of only one site (Site A, the most busy) so shouldn’t be considered necessarily typical. The first shows the change in mobile and tablet versus desktop devices since 2009.

The next covers the rate of change in versions of IE throughout 2013 (click to see it animated), of which the most notable is the huge growth of IE10 from 2.3 percent to 28.6.

IE’s overall market share is declining, as shown in this chart of browser share from Jun 2010 to Jun 2013. Chrome (desktop) and Safari iOS are the big winners, while Firefox, like IE, is in long-term decline. 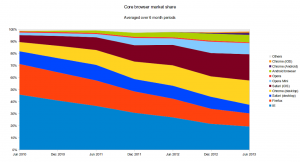 The final chart shows the rate at which a new release of Firefox replaces the previous (22 and 21, respectively, in this chart). The change starts after around a week; after ten days the new version overtakes the previous; and after 13 days, the replacement is almost total. 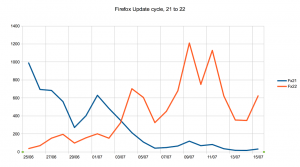 No conclusions. For your information only.