The Xbox 360 software update is due to roll out today, and among the many new features brings an Internet Explorer app, letting you browse the web on your TV (if you’re an Xbox Live Gold member). I was part of the Beta test programme and have been using Xbox IE for a few months, so here follow some of my thoughts, in a kind of review. Apologies in advance for the crappy photos.

First and most importantly, it runs the IE9 engine; I’m not sure whether time or performance constraints are responsible for it being this rather than IE10, but hopefully there’ll be a system update after Windows 8 and Windows Phone 8 are released, to see parity across devices.

Being IE9 means fairly good — although outdated compared to its peers — web platform support, including SVG, full CSS2.1 support, and some CSS3, such as border-radius, media queries, and 2D transforms — sadly the latter are still -ms- prefixed, which is no longer the case in IE10.

HTML5 support is not bad; audio and video, (see second update, below), canvas, and new semantic elements are there. The HTML5Test score is 120, which is a little lower than IE9 desktop because they’ve removed the Drag & Drop API.

Native video plays pretty smoothly; some initial jerkiness in full screen HD video on YouTube, but mostly not bad. If you want to use YouTube I suggest you opt in to Leanback mode, which is much easier to navigate on the large screen (I’ll come to navigation shortly).

There are no other plugins; the absence of Flash isn’t really a surprise, but the absence of Silverlight is. It means you can’t use websites like Netflix and Lovefilm, although both have apps on Xbox 360 anyway so maybe it’s not too much of a loss.

It’s a single-window browser, with no tabs. The URL bar and icons (back, refresh, options) are offscreen until you press Y, which opens the Web Hub; this is where your favourites, recent visits and ‘featured’ sites sit; I’m not sure if the featured sites are promotional or popular, but they don’t seem to be based on your browsing habits. 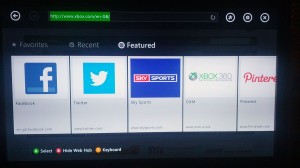 You’ll probably want to bookmark your favourite sites quite often, as entering URLs is a bit of a pain with the controller. The on-screen keyboard is QWERTY (which I don’t understand as that’s only useful for two-handed typing), and the imprecise controller means you often overshoot the letter you want. Some controller shortcuts — a tab key, switch between lower and upper cases — would have been really useful here. The autosuggest, using Bing, does alleviate the pain a little if it’s a popular site you want to visit. 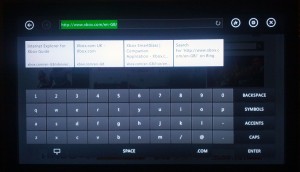 Using the controller isn’t a great input method for navigation, although there are some shortcuts here: Start is like Enter, B or Back go back, LT & RT zoom out and in (respectively), LB & RB navigate through your favourites. The imprecision of the controller can be irritating, and I think that controlling it with Kinect, using gestures and voice, might actually be a better experience. I’m also really keen to see how the forthcoming SmartGlass controller works (see third update, below).

Despite TV offering a much larger screen you likely sit a few metres away from it, meaning some text may be hard to read; you can zoom and pan the screen, but it might also be useful to use mobile optimised sites instead, where the text is larger and clearer; there’s an option to request these, which sends the IE Mobile UA string, and sites like Twitter certainly become easier to read.

Overall I think MS have done a good job in adapting the browser to TV, but I’m a little uncertain what it’s for; it’s sandboxed from the rest of the system, there are no web links to open elsewhere, and browsing is generally a solo experience where TV is a social one. There’s also the matter of the controller slowing down your actions.

Of course, there’s no harm in having a browser there, and I’m sure there’ll be one or two occasions where you want to see something on a large screen or show something to friends, although I can’t imagine using it much when I have a phone and tablet to hand.

Update: The IE for Xbox Developers Guide states that the Geolocation API isn’t available, so it’s a false positive on HTML5Test.com. It also says that @font-face supports .woff and .ttf files, but not .eot. The available memory is very low compared to modern devices, which may mean IE10 won’t be able to run on this hardware. Also, the JavaScript engine has no JIT compilation, so performance will be somewhat reduced.

Update: Microsoft have now released a SmartGlass app for Windows Phone and Android (more platforms coming soon). This is an interactive controller for the Xbox, allowing you to navigate around using your phone (or tablet?), with on-screen areas that map to the controller buttons. 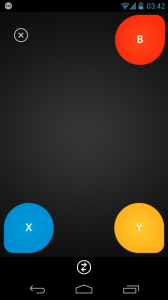 With regards to IE for Xbox it certainly makes some things easier; for one, using the keyboard on the phone rather than TV is a huge improvement. But it’s still lacking; touch input doesn’t allow the fine control of a mouse, and the distance between the phone and TV — and therefore your action and its consequence — causes a slight disconnect in perception, meaning it’s easy to overshoot the element you want to interact with. Although controlling the browser with SmartGlass is much better than the Xbox’s own controller, I still can’t imagine wanting to use this for an extended period of time.

6 comments on
“Internet Explorer on Xbox 360”