I’ve been out doing some freelance work lately and my wife needed a computer, so we bought a new Samsung Series 3 Chromebook. They’re inexpensive (£229), and as all she needs it for is internet access and light office work, it seemed a good fit. We’ve had it for a couple of weeks now, which seems like a fair amount of time for me to write a review.

Let’s get something out of the way first: it *really* looks like a Macbook when you open it. The keyboard is basically a direct copy, and colour and dimensions are very similar to those of a Macbook. You’d think that with all of their legal problems, Samsung would know better. 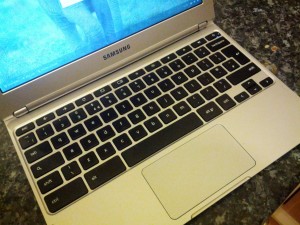 OK, looks aside, the first things you notice are that it’s very slim, and very light. It’s made of plastic, which helps to keep the cost down, but does make it feel a little cheap in places, quite noticeably when you click the trackpad. It boots in about 8 seconds (and closes down even faster), and is extremely easy to set up.

For the price, the spec is pretty decent. On the machine there are two USB ports (1xUSB2 and 1xUSB3), HDMI out, an SD slot and a USIM slot. The 11.6″ screen has a resolution of 1366x768. It has dual-band Wifi, Bluetooth, and a pretty poor VGA camera.

I’m not sure of the exact speed of the Exynos processor, but it runs full-screen 1080p HD video with no problem, and WebGL performance seems to be acceptable (although one intensive demo did cause some screen corruption after it had been closed). There’s no fan noise at all, which is great, and the battery life is excellent, reporting around 6.5 hours on a full charge.

Chrome OS is, basically, a browser. It has a kind of desktop, except you can’t do anything with it, like create folders or save files; I think it’s there just because people expect it to be. There’s a launcher bar along the bottom of the screen to which you can save app icons, but most apps are just bookmarks to websites, and the icons don’t provide any extra functionality.

A few apps open in a separate, non-browser window; a scratchpad, a calculator, a Photobooth-alike camera app, and the Files explorer. The file system is just a Downloads folder (there’s 16GB of SSD memory on board, although I’m not sure how much of that is free). Further storage is provided by Google Drive, and external memory drives.

I’ve yet to really test offline capabilities, but a lot of apps/websites simply won’t do anything. This really limits the utility; Gmail won’t even save a draft email if you have no connection. If you want to even check your emails when out of Wifi range, you’ll need a 3G dongle or SIM card.

As with the Chrome desktop browser, you can choose to switch Chrome OS to Beta or Dev channels, to get new features more quickly (at the possible expense of stability).

One interesting note: the Microsoft Core Fonts are mostly installed, except for Arial and Times New Roman, which are replaced by Arimo and Tinos, respectively, which have been chosen presumably because they have open licenses but the same metrics as their more famous counterparts. The Droid font family is also installed, and the UI uses Noto Sans.

Because of the inability to install a development environment or professional software means that this isn’t something that’s going to appeal to devs or designers — at least, certainly not as a primary machine.

It does have two advantages: it’s cheap, and portable. For what my wife needs, it’s perfect; and it’s a pretty useful secondary machine. In terms of utility I’d actually put it closer to a tablet; it’s suitable for media consumption, web browsing, and most standard office tasks.