Back in March I wrote about HTML5 Form val­i­da­tion and the prob­lem with the appear­ance of error mes­sages. I pro­posed a syn­tax for styling the error mes­sages, and short­ly after I pub­lished the post, I sub­mit­ted the pro­pos­al to the W3C via the www-style mail­ing list.

I’ll dis­cuss quick­ly the result of that sub­mis­sion, but first I should men­tion that I’ve since found out that the Google Chrome devel­op­ers have already imple­ment­ed their own syn­tax, and it’s not too far removed from what I pro­posed. Before I get to that, how­ev­er, allow me to gripe.

What the feed­back on my pro­pos­al would be, I have no idea — and may nev­er know. As I men­tioned, I sub­mit­ted it via the www-style list, but my emails were nev­er pub­lished. I was told that as a new user my mail would be held for approval, but that was six weeks ago. I emailed the list admin­is­tra­tor and tried to sub­mit it again, but nev­er got a reply.

I have to say that, as a devel­op­er try­ing to get involved in the stan­dards process — which is what the W3C claim they want — this was not a good expe­ri­ence for me. I had a seri­ous pro­pos­al which I want­ed to open up for dis­cus­sion, but was com­plete­ly unable to do so and met with a wall of silence. I’m not against there being a mod­er­a­tion and approval process, but only if there’s an even­tu­al result and some kind of com­mu­ni­ca­tion throughout.

OK, with the moan out of the way, I’ll talk about the Chrome val­i­da­tion error styling syn­tax. The error mes­sage, known as the ‘bub­ble’, is made of four div ele­ments which are acces­si­ble via four pseu­do-class­es, each of which applies to a dif­fer­ent div in the bubble:

I’ve made a quick exam­ple which you can see in action on the HTML5 Forms demo — you’ll need to use Chrome to see it, and you can view the source to see the styles I’ve used. Below is an image com­par­i­son of the default mes­sage (top) and my styled ver­sion. Note: I took a lit­tle crit­i­cism for call­ing the default styles ‘ugly’ in my orig­i­nal post, and I don’t want to claim that mine is any bet­ter, because it’s real­ly not; it’s just dif­fer­ent, to act as an example. 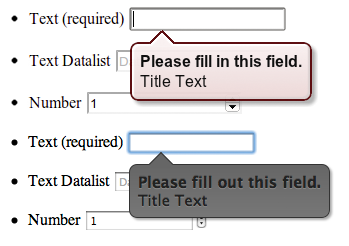 You can read a lit­tle more about this syn­tax on the WebKit wiki, and also see the default styles the error mes­sage uses. I’ve no idea if Fire­fox or Opera imple­ment their error mes­sages in the same way so don’t know if this is like­ly to become stan­dard, or will always remain a WebKit-only syn­tax. I have to say it’s not real­ly an ele­gant solu­tion, but it works.